In Words and Pictures

During my six-month 2018-2019 Global Scholar Fulbright Fellowship, I photographed libraries throughout Greece, Italy, and Israel. The Fulbright fellowship allowed my collaborator, Ellen Manchester, and I to dig deeper into the unique character of libraries in each of these countries, and to examine their relationship to the surrounding culture. At the time, we were particularly interested in the interaction between libraries and the recent influx of refugees and migrants into Europe and the Middle East. We also followed several other related topics as they arose. The process of photographing during the Fulbright fellowship led us to several new insights into libraries, literacy, education, and the cultures in which we lived. We are currently putting together a large-scale book of my photographs and essays that emerged from this work.

I spent eighteen years photographing public libraries throughout the United States. Princeton Architectural Press published a book, The Public Library: A Photographic Essay, from that work in 2014. Bill Moyers wrote the introduction, Ann Patchett wrote the afterword, and Toni Morrison wrote the endorsement. Altogether, fifteen writers contributed their work to the book. In that same year, I received a Guggenheim Fellowship to spend six years photographing a struggling library system in one of the least literate places in the United States: Stockton and San Joaquin County, CA. In 2016, Ellen and I decided to expand the range of our study to include libraries in a broader, global context. We started by photographing libraries in northern and eastern Europe, as well as Ukraine and Moscow. Our journey took us from a library in the infamous refugee camp called “the Jungle” in Calais, France, to Holocaust-haunted former synagogues turned into libraries in Poland, to libraries close to the hot war in eastern Ukraine, to the National Library of Russia called the Lenin Library. The current Global Library Project is the culmination of twenty-eight years of photographic and scholarly research trying to understand the diverse and changing role of libraries throughout the world. We hope to produce several publications from The Global Library Project. Our first book is focused on North America (Canada, the U.S. and Mexico); Europe (Denmark, France, Luxembourg, Belgium, The Netherlands, Switzerland, Germany, and Italy); Eastern Europe (Poland, Czech Republic, Ukraine, and Russia); the Balkans (Greece); and the Middle East (Israel and Palestine). Future books will explore Africa, Asia, Oceania, and Central and South America.

We have chosen to further divide these geographical areas into concepts or ideas that emerged from the years of our photographic work and from our research. Several of these ideas emerged from my Fulbright Global Scholar Fellowship. Subsequent publications will continue to explore these ideas as well as pursue new thinking that will become apparent as we travel to different parts of the world.

The primary focus of my Fulbright grant explored the subject of Refugees and their relationship to libraries in Greece, Italy, and Israel. Italy and Greece had been recently overwhelmed by people fleeing poverty, war and persecution in their homes. Israel was founded, in part, by refugees fleeing the aftermath of the Holocaust.
I was originally inspired in 2016 to follow this theme by seeing the work that libraries were doing with refugees in Denmark, Belgium, and especially in Germany. One of the first places where refugees went when they arrived in Germany was the local public library. There, they began the process of learning the language, the laws, the customs, and how to become a German citizen. When we visited Greece on the Fulbright Global Grant in the Fall of 2018, it was dealing with two catastrophes. The first was the collapse of its economy and the perception that the European Union was being unfair in its conditional help. The second catastrophe was a massive influx of refugees that had been going on for several years. Because of their location, Greece and Italy were on the forefront of this wave of refugees trying to enter Europe. Because of the economic stress, most libraries in Greece did not have the finances or staffing to deal with the refugees as we saw in Germany. As a result, we expanded our study to the work being done by various NGOs to help the desperate waves of humanity coming into Greece. During our Fulbright time, we photographed many refugee libraries in Greece, Italy, and Israel. They frequently embodied hope in the demoralizing environment of a refugee camp. Within the refugee camp, we found that libraries even acted as their own temporary refuge.

Additional ideas emerged from our work. One that I called Bibliocide documented the intentional or accidental destruction of books or a library. The images from this idea looked at mass-scale book theft, book burnings, and the physical destruction of libraries, culture and people, as well as the preservation and restoration of books and libraries. The idea of Converted Spaces looked at how buildings sometimes evolved in fascinating ways, including libraries that once had other purposes, such as churches or other sacred spaces.

Another idea that emerged from the Fulbright experience were the related ones of Memory and National Libraries/National Identity. Libraries are a repository of human memory. National Libraries hold a type of memory of national identity that helps bind us together as nations and as a people. In another section, we explored The Word and Book Art. The Word looked at some of the infinite variations of the physical written or printed word that we found in libraries. It also looked at the oral tradition of plays, performances, poetry and reading aloud. Book Art explored the intersection between the physical object of the book and the creation of art. Finally, our last section honored and celebrated Librarians. Their universal professionalism transcends nationality, and they offered the kind of personal knowledge and guidance to students, scholars, and ordinary citizens that is usually not available through a computer. A link to and slide show from my Global Library Project can be found on my web page at www.robertdawson.com. 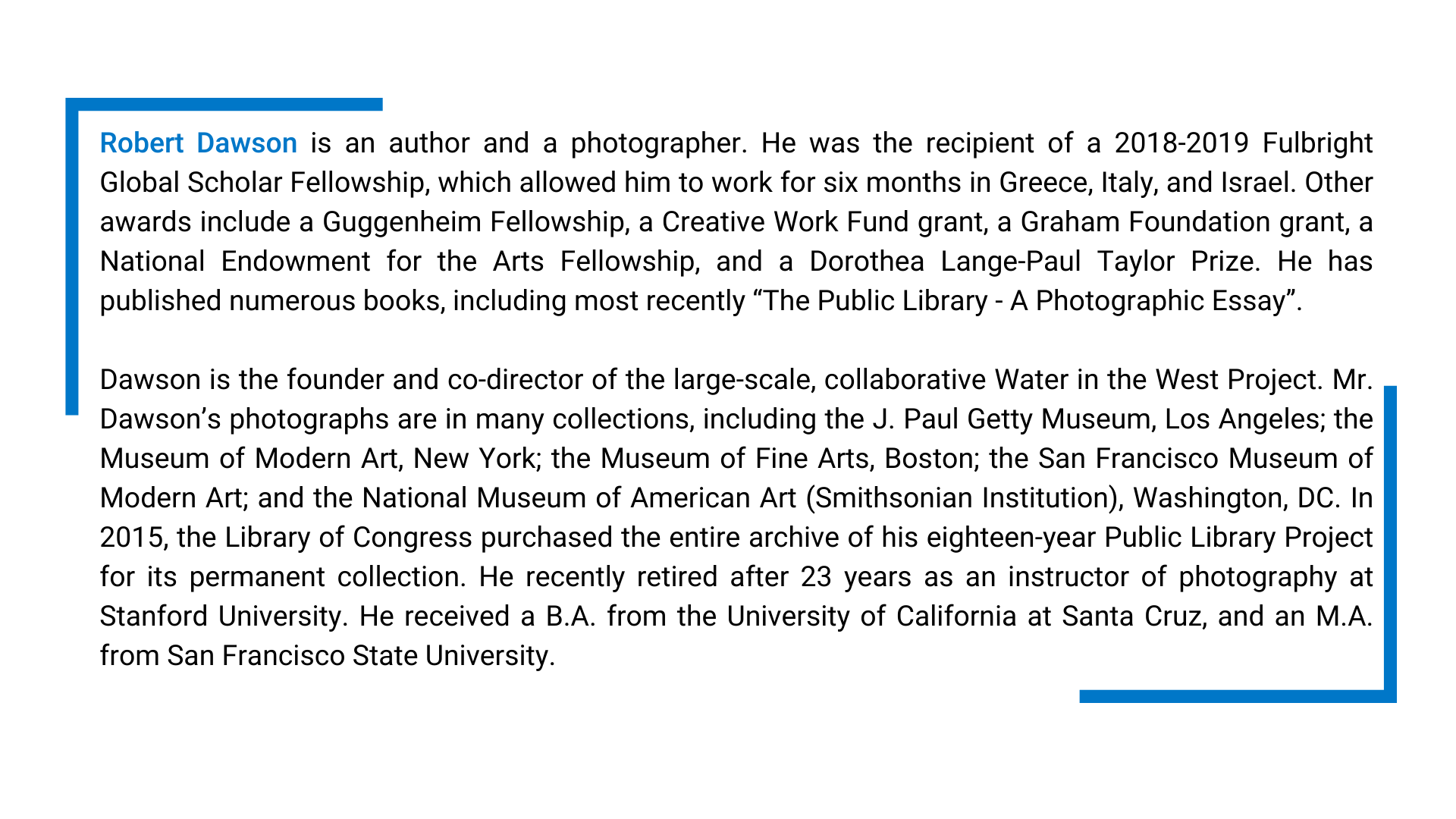 Unlimited opportunities - my experience as a Fulbright fellow
Learning life lessons while on a journey to teach
In Words and Pictures
International human rights and the corporate global value chain
Law and Ritual
The weight of small things
A bridge between the theoretical and practical worlds
Bouncing droplets: searching for intuition in the quantum maze