During my Fulbright Israel PhD research fellowship, I visited dozens of archaeological sites as part of the data collection for my dissertation project. My dissertation examines the emergence of biblical imagery in late-antique synagogue art in both Israel and the wider Mediterranean Jewish diaspora. Having the opportunity to see these synagogues in person gave me a more holistic and well-rounded understanding of how these biblical motifs functioned in their broader social and religious environment.

Over the course of my Fulbright experience, I conducted dozens of site visits throughout Israel in order to photograph and study the biblical images that form the basis of my research. Some of these artifacts were located in-situ (in their original place of discovery), while others were displayed in museum collections. One of my favorite sites was the Beth Alpha synagogue. This synagogue was first discovered in 1928 by members of the burgeoning Kibbutz Hephzibah and was subsequently excavated by Eleazar Sukenik. Today, the site is managed by the Israel National Parks Authority and is a great stop for anyone touring Beth Shean and the numerous natural springs in the Jordan Rift Valley. 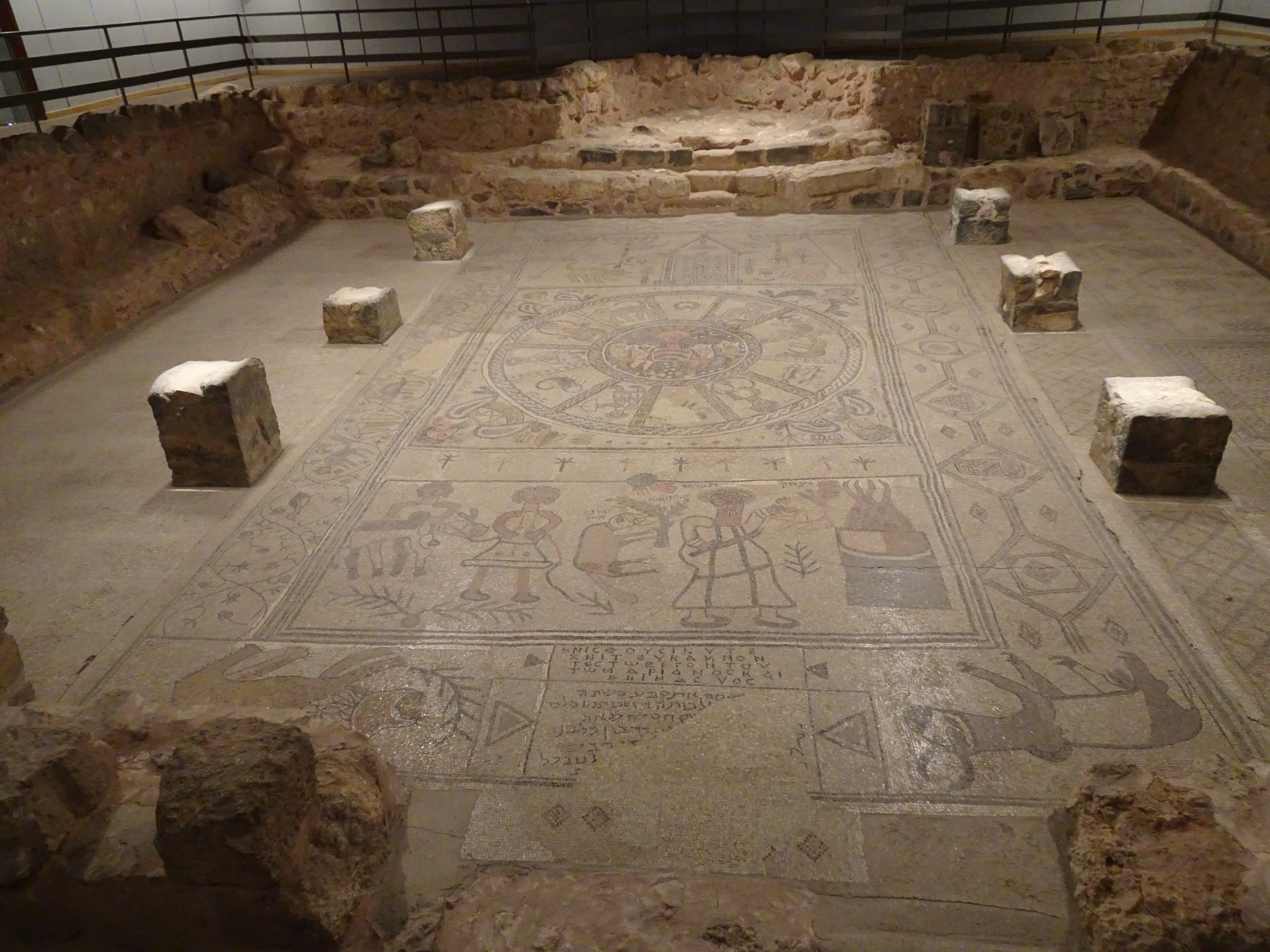 The Binding of Isaac panel at the Beth Alpha synagogue, photograph by author

The Beth Alpha synagogue features an important mosaic pavement illustrating the Binding of Isaac (Gen. 22: 1-19) in the central aisle of the sanctuary. In this scene, Abraham is shown on the far right, holding a knife as he dangles his young son, Isaac, over a fiery altar. To the right, the hand of God emerges from the heavens, instructing Abraham not to sacrifice his son, but instead to offer a ram. The ram is shown standing vertically in the center of the composition, next to a small bush. The encounter is witnessed by Abraham’s two servants, pictured on the far left, who accompanied Abraham and his son on their journey. Some scholars speculate that financial constraints may have led the local villagers to hire less-skilled mosaic craftsmen, which resulted in the naïve, cartoonish style that characterizes this biblical composition.

Like Beth Alpha, most of the synagogues I visited were located in small, rural, Jewish villages that flourished in Israel’s northern interior in late antiquity (ca. 300-700 CE). During this time period, villages like Baram, Chorazim, and Beth Alpha served as the agricultural breadbaskets for the region’s larger, urban centers, such as Beth Shean and Tiberias. In these villages, the synagogue, which functioned as both a religious house of worship and a social gathering place, was typically the largest and most architecturally impressive building. Oftentimes, the synagogue was accompanied by a second building called a miqvah (ritual bath), a small bathing installation utilizing naturally collected rainwater that ancient Jews used to cleanse themselves in accordance with Jewish purity norms. The remainder of the domestic structures in these villages were often simple stone buildings featuring little to no artistic decoration. 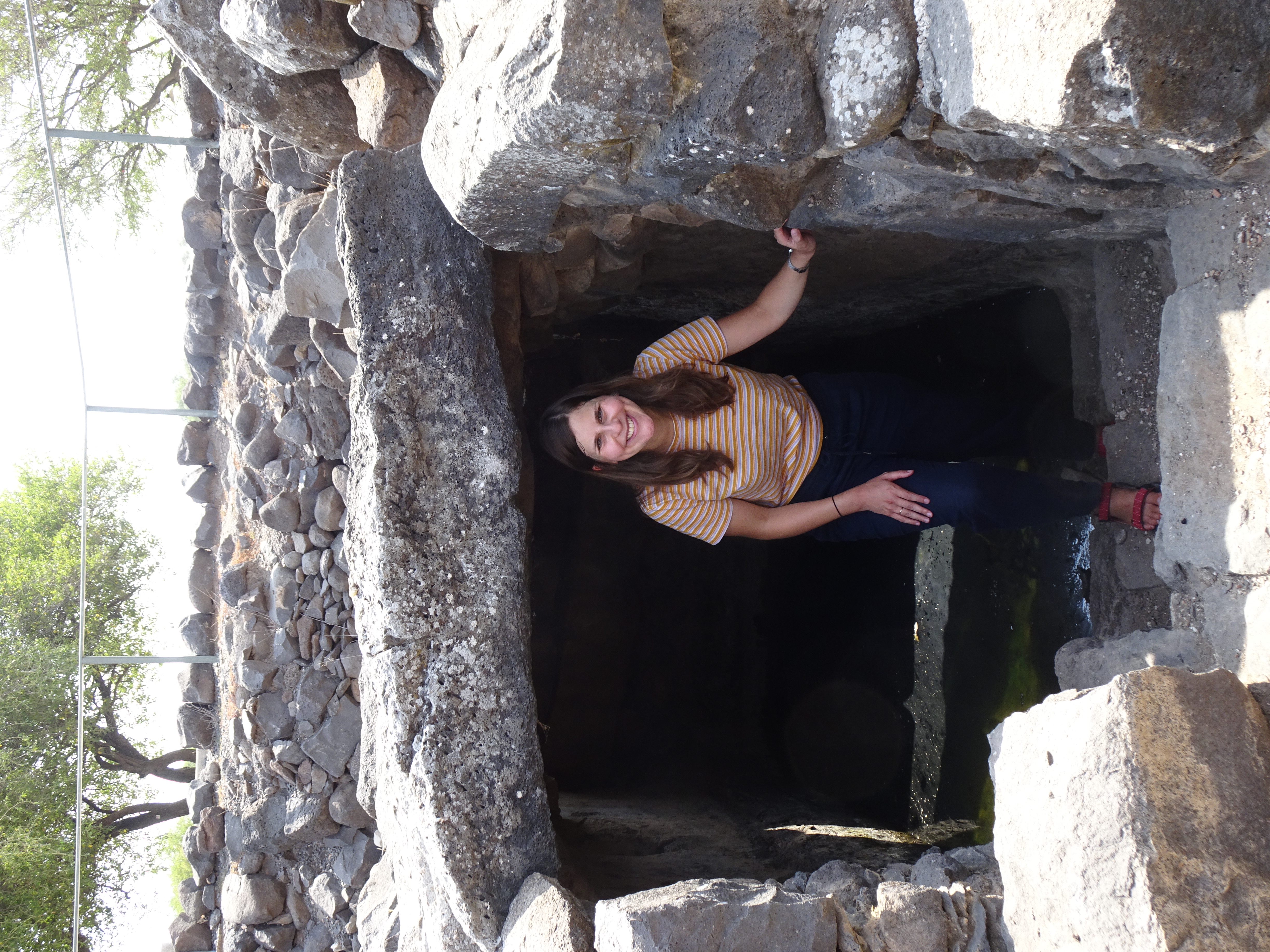 The miqvah (ritual bath) near the Chorazim synagogue, photograph by author.

The synagogues, by contrast, were lavishly adorned sites of collective memory, where Jewish villagers collaborated with local mosaicists and stone carvers to create illustrations of important biblical narratives that would be displayed in the synagogue, ranging from Abraham and the binding of Isaac, the Red Sea Crossing, to King David with the weapons of Goliath, and Daniel in the lions’ den. For the Jews who worshipped in these synagogues, these images served as more than just literal illustrations of the biblical past. They acted as visual role models that exemplified central values of late-antique Judaism, such as the covenantal relationship between the People of Israel and God, Jewish leadership, and the importance of prayer.

The biblical iconography represented in these synagogues was the result of a collaborative process between the local Jewish patrons, who commissioned these works of art, and the local mosaicists or engravers, whom they hired to execute their vision. These local artisans, in turn, adapted iconographic models that they were familiar with from Greco-Roman culture to illustrate the biblical narratives and heroes found in late-antique synagogue art. In order to clarify the exact subject of these biblical scenes, the artisans often included labels identifying the names of the biblical heroes, as well as relevant verses from the Hebrew Bible. 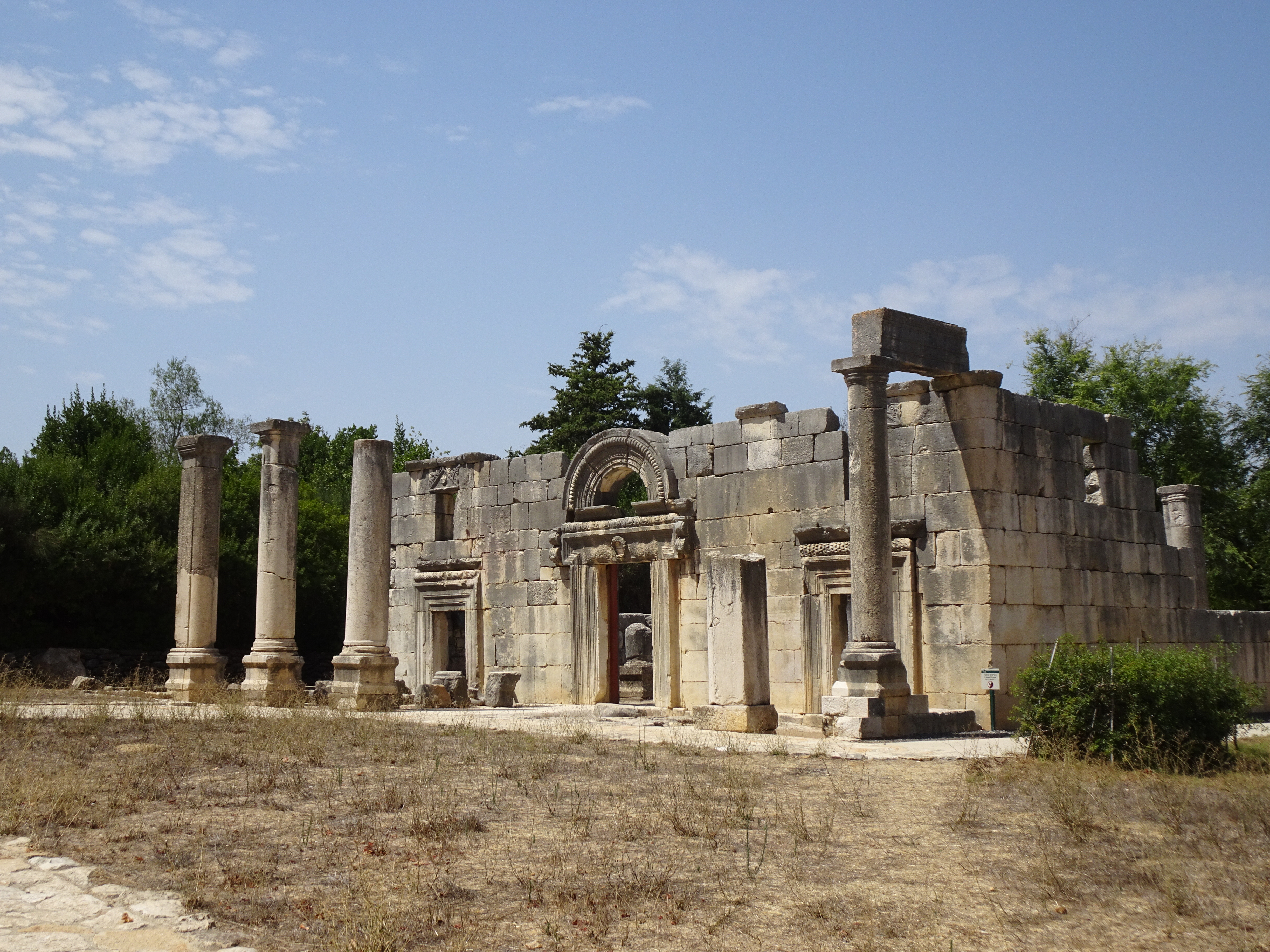 Exterior of the Baram synagogue, photograph by author.

We know from the numerous dedicatory inscriptions that were found in late-antique synagogues in Israel that hiring mosaic and stone craftsmen to create custom-made biblical images was highly expensive, often requiring substantial donations from the entire village, as well as wealthy individual donors. The financial support for these artistic ventures most likely came from the surplus profits of the local village economy, which was typically oriented around the production of olive oil, wine and grains. As a result, we often find olive presses and other commercial installations in close proximity to the synagogue. The creation of Jewish biblical iconography thus directly correlates to the economic prosperity these agricultural Jewish villages enjoyed during late antiquity.

The on-the-ground archaeological experience that I gained through my Fulbright Israel award program greatly deepened my understanding of the complex social and economic milieu that gave rise to the rich corpus of Jewish biblical iconography found in late-antique synagogues in Israel. I look forward to synthesizing the results of my research back here in the United States, and to publishing my dissertation as a future book project! Stay tuned, Fulbright Israel community :-)

Articles are written by Fulbright grantees and do not reflect the opinions of the Fulbright Commission, the grantees’ host institutions, or the U.S. Department of State.

Art & Spirituality: The Path That Has Unfolded Since My Fulbright Years
Interfaith Interactions of the Medieval Mediterranean: The Case of the Custody
The Male-Bias in Conflict Resolution: One Fellow's Experience in the Field
A journey to uncover the beauty of the ancient synagogues of Israel
The Multi-dimensions of the Fulbright Experience
Unlimited opportunities - my experience as a Fulbright fellow
Learning life lessons while on a journey to teach
In Words and Pictures
International human rights and the corporate global value chain
Law and Ritual
The weight of small things
A bridge between the theoretical and practical worlds
Bouncing droplets: searching for intuition in the quantum maze