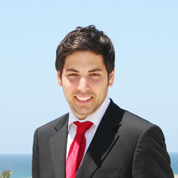 Naor R. Bitton is a Senior Adviser to the Mayor of Ashdod.

Naor (29) is a community leader in Ashdod. During the Summer of 2011 he led the "Social Justice" movement in the city. He later co-established a local political party, calling for a more transparent local government and focusing on the needs of Ashdod's youth. During his Fulbright Fellowship at the Humphrey School of Public Affairs at the University of Minnesota, Mr. Bitton co-founded Students Supporting Israel (SSI) -  a nationwide campus movement, with 48 chapters across North America. His work with SSI and the Jewish community helped him win the "University of Minnesota Public Service Award."

Following the Fellowship, Naor served as the General Assembly Adviser at Israel's Permanent Mission to the United Nations in New York.  Mr. Bitton also had unique a experience in American politics - He interned as a Cabinet Adviser for Minnesota's Governor and as a Policy Adviser in the office of a Colorado Congressman on Capitol Hill. Today, Naor serves as a Senior Adviser to Dr. Yechiel Lasri, the Mayor of Ashdod. He can be contacted at: [email protected]